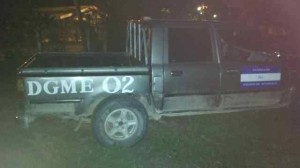 At approximately 10 am the morning of 22 of November, 4 people identifying themselves as Honduran Immigration agents, arrived at the offices of ERIC-SJ (Equipo de Reflexión Investigación y Comunicación – Honduras) , asking to see members of the HSN/AGJ delegation of international observers in Honduras for national elections this Sunday.

The delegation, which was not present at the time,  is comprised of 166 persons from the United States, Canada, and El Salvador who have been accredited by the Supreme Electoral Tribunal of Honduras as official election observers.  Having failed to find their first target, the demanded to see the identification of all the Hondurans present at the offices of ERIC-SJ. 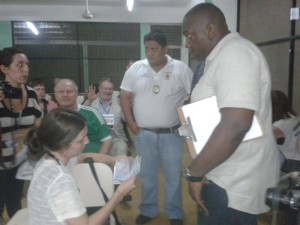 Ironically only one hour earlier, the delegation completed three hours of formal training in the same room  with official representatives of the Supreme Election Tribunal. In total,  four persons arrived in a grey crew-cab truck without license plates– but with DGME (official Immigration Department) lettering– and drove onto the private property. Their leader was Juan Reynaldo, badge number 066, and his associates were Cesar Medina, badge 086, Walter Ramos, badge 088, and Diana Avila, badge 052.   Originally, Agent Reynaldo said he was responding to complaints from neighbors.  Later, he changed his story to say that General Bernardino Cervantes had sent orders from Tegucigalpa to investigate the group.  The Honduran Government’s Deputy in charge of immigration in Yoro Province, Magdalena Medina, claimed to know nothing of the incident. 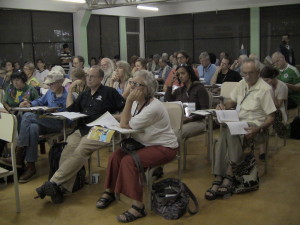 Although the Honduran government begrudgingly has permitted international election observers for the tense, high-stakes elections this Sunday, this calculated act of harassment exposes the government’s desire to conduct this election outside the view of the concerned human rights and pro-democracy forces. Delegates consider these actions as a clear and hostile attempt by the Honduran government to intimidate us and to delegitimize the voices of electoral observers who have arrived in good faith to witness Sunday’s historic vote.