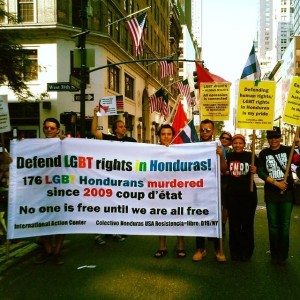 The Honduras Solidarity Network (HSN) is a decentralized network of approximately 30 organizations from across Canada and the United States that are committed to demonstrating and advocating for solidarity with the Honduran social movement.

All HSN members believe strongly that Canada and the United States play a fundamental role in the social, economic, and political context in Honduras. Together with the Honduran social movement, HSN members are committed to denouncing and opposing US and Canadian imperialism, neoliberalism, and the role of the International Financial Institutions (IFIs) in generating poverty, inequality, insecurity, and violence in Honduras. As US and Canadian citizens, it is our responsible to oppose and educate our communities in North America about what the decisions of our  government and their impacts, in relation to Honduras and the Central American region.

Various HSN members have long-term trusting relationships and projects with grassroots organizations and movements in Honduras, and believe that uniting our efforts under the HSN, will strength our outreach work in North America.

The HSN was formed after the June 28, 2009 military coup against President Manuel Zelaya as the Honduran social movement or the National Front of Popular Resistance (FNRP) denounced the murders, disappearances, threatens, and human rights violations of the Honduran post-coup regime, supported and financed by the US and Canadian governments. Over 5 years after the coup, the struggle of the Honduran social movement continues as further militarization and neoliberalism create on-going crises in the country.

The HSN has a public list-serve (Presente) for groups and individual activists who want updates on important news from Honduras and Honduran solidarity work and who want to participate in serious discussion on those topics.

OUR MISSION IN SOLIDARITY WITH HONDURAS