“Our people have awakened, and we’re not going to give in to those who want take away what is ours as indigenous Lenca people,” said Francisco Sanchez Garcia, President of the Indigenous Council of the Council of Indigenous and Popular Organization of Honduras (COPINH).

Sanchez spoke of his community, Rio Blanco, the 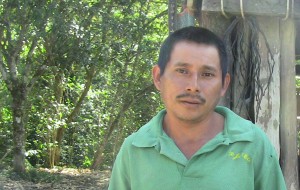 site of a five-month old blockade to prevent construction on the World Bank-funded Agua Zarca Hydroelectic Project. The Chinese company SINOHYDRO and Honduran contractor DESA are the companies slated to build the project. The community sits over the only entry road down to the proposed dam-building site, and they have blocked the road consistently since April 1. The Project would create a huge dam over the Rio Gualcarque, burying many sacred Lenca ceremonial places and thousands of acres of fertile growing land. Local people also assert that the government is hiding a shadow project to build a gold mine that would utilize the dammed water and generated electricity from the dam, should it be built.

“If this project goes forward, it will ruin our river, poison the fish, and drown our forests. And what for? If we give up our lands, we’ll still have to pay for electricity like everyone else,” he said.

Francisco reported that since the blockade began, he’s been subject to police harassment, death threats and the worst, he said, was this past November 1, when police rifle-butted his 17 year-old son three times in an attempt to provoke his family into violence. Francisco and his wife Mercedes Perez say they know who is making the death threats, but they live with the constant worry that those who made the threats could hire unknown hitmen to carry them out. As a result, Francisco must be accompanied by community members everywhere he goes.

“He went out this morning by himself and I told him, ‘You can’t do that anymore.’ He needs someone with him all the time, in case they try something.” said Mercedes. 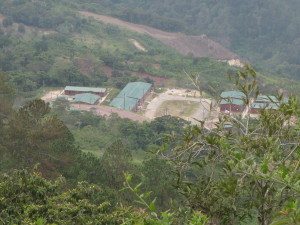 The DESA/SINOHYDRO base camp and hydro-electric plant is situated in a valley a couple of miles from where the proposed dam would be built. When this reporter visited the site on November 18, 2013, a formidable security gate defined the plant’s perimeter. Security personnel were visibly unnerved when receiving a surprise visit. Two guards asked us to wait while a security official lumbered up to the gate. Meanwhile, the Director of Security, who would not give his name, and who was not on site at the time of our arrival, rushed down to the gate in a grey Nissan pickup aggressively honking as he approached and barreled through.

The uncomfortable scene at the gate was quite different than that of July 15, when the people of Rio Blanco and COPINH supporters marched on the site. In July, the gate had not yet been built. The only security was the Honduran military. As marchers approached the site, they called out chants for the company to get off Lenca land. Soldiers braced themselves for a conflict.

Then, a nervous soldier fired two shots into the air. Marchers paused briefly, but remained resolute in their goal, and began to advance again. Finally, as the march got close to the DESA plant, at least two soldiers fired indiscriminately into the crowd. Four people were shot. COPINH leader Tomas Garcia, who was near the front of the march, was shot multiple times, including in the head, and died at the scene. His son was also among those who were shot.

Tomas’s death confirmed local people’s fears that the authorities were willing to end lives to ensure the building of the dam. Publicly, the company blamed the unarmed protesters for instigating the violence, but they knew the situation could quickly spiral out of control. So, DESA/SINOHYDRO pulled out the heavy machinery that it had brought in before the blockade had been constructed.

“When blood was spilled, that’s when they took the equipment out,” said Rio Blanco’s Francisco Sanchez. “Our companiero gave his life to get that machinery out of here.”

A CAMPAIGN AT HAND?

Further discussion at the security gate of the inactive Hydroelectric Plant intimated at a campaign launched by the government and DESA, the company contracted to oversee the construction of the dam. 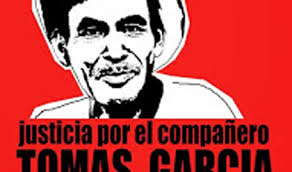 When asked about the killing of Don Tomas Garcia, the lead security guard, who refused to give his name, broke it down: “There was a conflict between two sides. One side [the protesters] got out of control, and the other side [the Honduran Army] overreacted.” Until now, no company or government officials have publicly admitted any fault or responsibility on the part of troops. They have consistently blamed the protesters for provoking the violence that led to Tomas’s death.

He continued, “…but that happened in the beginning of the project. It has all been resolved. We’re on pause now. The challenge is to publicize (“socializar”) the benefits of this project for the surrounding communities, so that they know the positive side of it. Then, we can move forward. ”

When asked what the benefits were, the security guard replied, “I’m really not qualified to talk about it, but yes, improved roads, better education, and better healthcare.”

Back up the hill in Rio Blanco, the hints of an orchestrated campaign to buy off community leadership were evident in the stories of the struggle.

“Here in Rio Blanco, we are 100% opposed to this project, but some of the elders and many elected leaders of communities around here have been paid off so that they go along with it,” says Francisco Sanchez.

“Some of the people who used to march with us in the streets have switched sides and now support the project.” 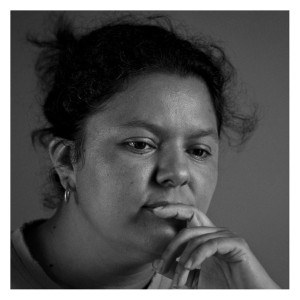 It’s September 12, 2013. In the court at Santa Barbara, Intibuca Judge Alicia Reyes calls the hearing to order. On the defendants’ side two lawyers are present, but one of the defendant’s chairs is vacant. Berta Caceres is defying the Judge Reyes’s order to jail her while she awaits trial. The prosecutor is charging Berta and two co-defendants Aureliano Molina y Tomás Gómez Membreño with “damage to private property,” “land theft,” and “coercion,” related to the struggle against the Agua Zarca project. Berta also faces another charge of carrying a high-caliber weapon. None of these charges have ever been substantiated by anyone other than DESA employees, and the high-caliper weapon planted in a COPINH vehicle has not been researched to trace its origin.

Maria Aguiluz, director of the Centeral American and Mexican chapter of the Center for Justice and International Law (CEJIL) says that the fabricated charges amount to legal harrassment of Berta and her co-defendants. The charges represent a new strategy by the Honduran authorities who, she claims, “are using the judicial infrastructure as a tool persecute human rights defenders and impede their ability to carry out their work.”

Aguiluz has called for a hearing on Berta’s case at the Interamerican Commission on Human Rights, based at the Organization of American States. Meanwhile, thousands of people have demonstrated in Honduras and internationally for the Honduran government to drop the charges against Berta and her two co-defendants.

The mounting pressure is beginning to take effect. According to recent COPINH declaration published on the organizational website, the prosecution wants to commute the charges and the legal process into a mediated “reconciliation process” between prosecutors and the COPINH defendants. This usually results in dropped charges in exchange for a paying a small fine and admitting to some nominal charges. Berta and her lawyers remain resolute in rejecting these offers.

From the COPINH site:

“We declare, personally and as an organization, and because we have truth and dignity on our side, that Berta Caceres and COPINH will never be blackmailed or pressured into accepting any type of agreement that the Conciliation Hearing and the accusers are proposing: that she [Berta] admit that the weapon supposedly found in the COPINH truck was hers, or that she ask forgiveness, or that she reimburse the Honduran state for troubles caused by this perverse accusation.

We demand that the Honduran State de-authorize the Public Prosecutor, and that they drop these unjust and baseless charges.” 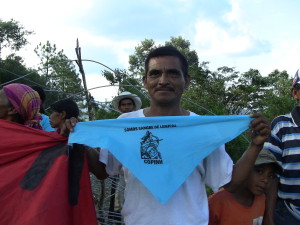 Back in Rio Blanco, the question of this Sunday’s Presidential election (11/24/13) looms large, but Francisco Sanchez expresses a pragmatic approach.

“Politicians make lots of promises, but those usually turn out to be lies,” he said. “Whoever wins this election, we’re going to continue this struggle to defend our lands, because with politicians there are no guarantees.”