This was a concern expressed by various municipal candidates of the FAPER/UD alliance who threatened to renounce their candidacy because their political party was selling their representation at the voting table.

As reported in La Prensa, “the candidates that we are ready to resign we are four, of the municipalities of San Jose Comayagua, Meambar, Taulabé and Siguatepeque, because we do not want to be a part of the corruption”.

Having more representatives at the voting tables is critical during the vote count and scrutiny because all members of the table must determine together what votes are null and valid. More representatives of one party will skew the ratio.

The official election campaign ended as of Monday night and now comes the “period of silence” prior to the voting on November 24th, but the concerns about the general atmosphere and abuses continue. After just a few days in Honduras, we have heard numerous complaints about intimidation and potential fraud in the elections and even more grave concerns about the general human rights atmosphere of intimidation and threats and their effect on the electoral process and on the social justice movements. 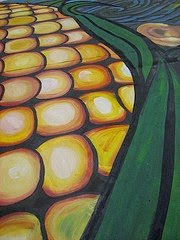 More than 60% of the Honduran population is rural and most of this population is small farmers or landless farmers who live in extreme poverty.  Members of the national leadership of the CNTC  (National Center of Farmworkers) who represent more than 400 campesino communities around the country are indignant about the continuing violence against their members and the deliberate disenfranchisement of thousands of campesinos and campesinas.  As this post is being published we are getting reports of large violent evictions of campesino communities in northern Honduras. More information is not yet available.
There are currently 3,061 CNTC members who will be unable to vote because of pending legal actions and charges against them related to the  agrarian struggles in the country. In the province of La Paz where there have been several extremely violent evictions of poor farmers  more than 400 CNTC members are in legal processes, two thirds of the charges were filed in the past three months. In the province of Francisco Morazan close to Tegucigalpa 39 CNTC local leaders have been disenfranchised in the same way. Most of the charges around the country  have been filed since the election campaign has intensified; court dates have been postponed repeatedly to occur after the elections. In Santa Barbara, on August 6th, 553 families were evicted as police used tear gas and fired live rounds. One of the campesinos from the community told La Voz members that the ruling National Party congresswoman for that region, Maria Concepcion Figuerero de la Guevara, lent her car to the police for use during the raid and was overheard telling the police that they should “arrest all of them (the campesinos) because that is more than 80 votes that aren’t for us”.
Concerns about Fraud and Manipulation
Today, November 20th, the media is reporting widespread electricity outages in the capitol city. This was confirmed by a call from the CNTC in Tegucigalpa. The neighborhoods affected by the outages – which are predicted to continue through the elections on Sunday — are in neighborhoods known to be LIBRE strongholds: The Mercedes, Kennedy, San Francisco, Hato de Medio, Dilbio Paraiso, Nueva Capital, Pantanal, Quesada and other marginalized barrios. 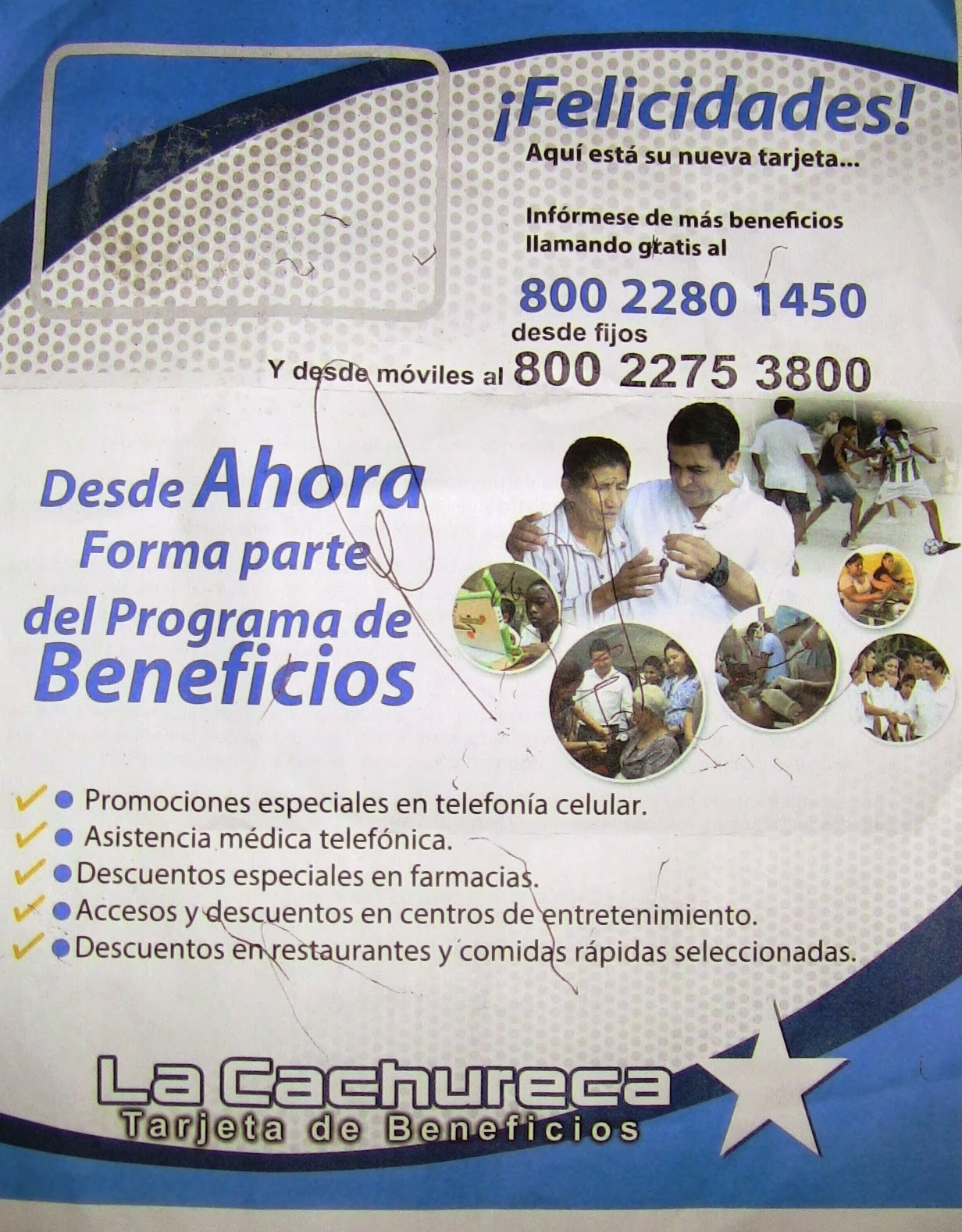 In order to vote Hondurans must be on the official government registry and have in their possession a national identification card. There are numerous complaints reported in the Honduran press that the  registry has eliminated names of people who are alive and want to vote, and has not eliminated the names of people who are dead, has issued multiple identification cards to the same people while others have not yet been able to get their cards (reported on Globo TV). While much of this confusion is not necessarily deliberate, the concern of many Hondurans is that it allows and facilitates deliberate fraud. Numerous people we talked to shared stories of people being offered money to “lend” their Identification Cards to organizers from the Liberal and National Party and the existence of “black market” Identification cards.
Residents of the area of Jutiapa near Tegucigalpa state that the National Party is paying people 200 Lempira to get on the National Party buses. There are also complaints from LIBRE members that the National and Liberal Parties have reserved almost all the for-hire buses and vans, not because they need all of them but in order to block LIBRE from being able to provide transportation. They reported that that was what occurred the day of the campaign closure rallies of LIBRE and the National Party in Tegucigalpa, but that thousands of LIBRE supporters walked to the rally site from across the city while many were also picked up and given rides by LIBRE supporters. 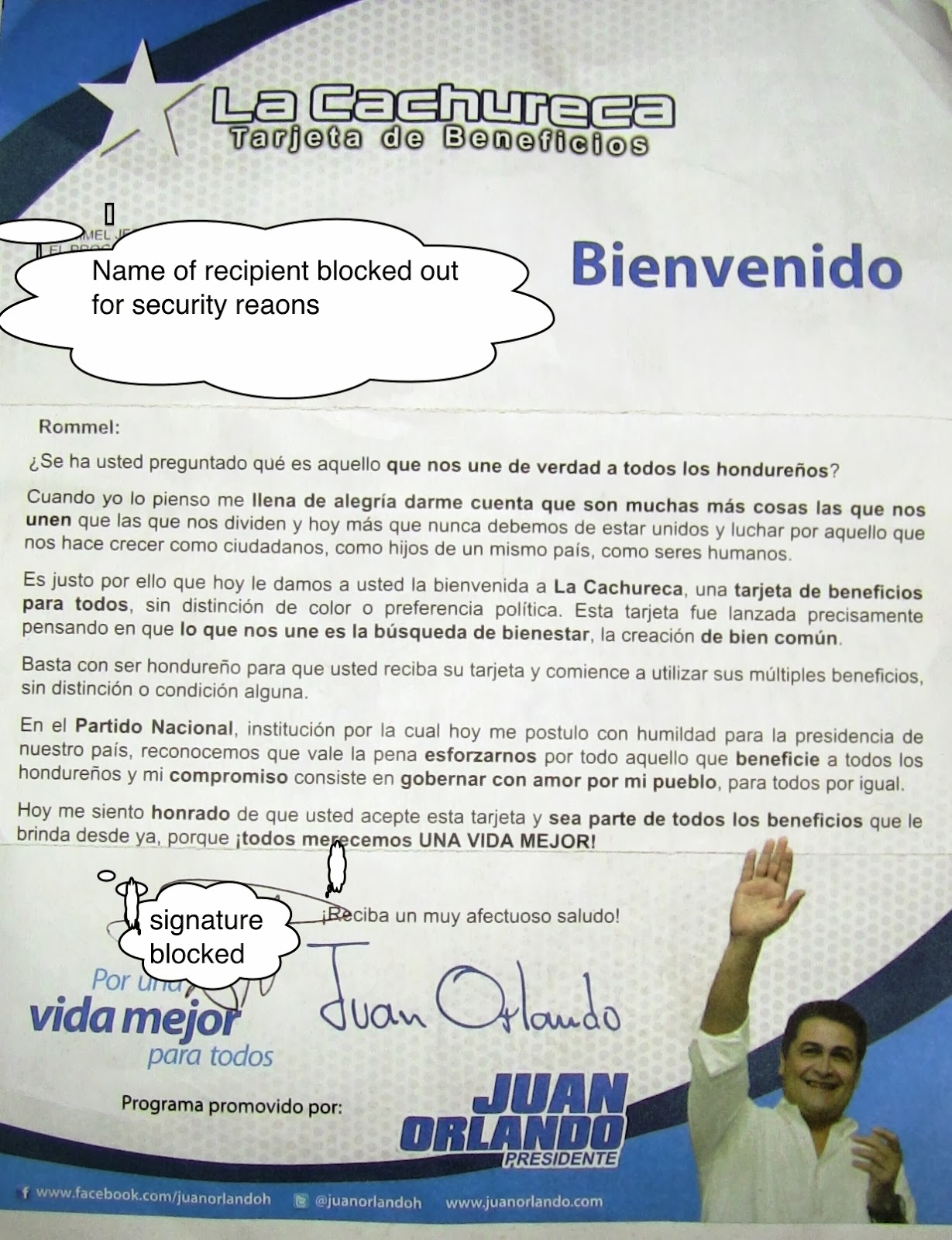 The National Party candidate for President, Juan Orlando Hernandez, is the current president of the National Congress. He is taking full advantage of his position to push the limits of campaigning. The government program of “Bonus 10 Thousand” (Bono 10 mil) was established by and funded by international development banks in 2010 and makes payments to very poor women/mothers who meet requirements like sending their children to school daily. Juan Orlando is distributing these funds just days before the election and  there are numerous complaints in the media by Hondurans  that National Party activists are telling the women they need to vote for Juan Orlando to keep getting the payments and that during the hours spent in the lines waiting for the payments the women are continually being “lobbied” for the National Party. In addition, Juan Orlando is distributing prepaid gift cards to people reportedly if they say they will vote for him. (see the photo of the gift card flyer in this posting, Los Cachurecos is the National Party nick name).
More intimidation and threats against Human Rights Defenders.

Threats against human rights defenders in Honduras are constant and obviously aimed not only at the defenders but at the people they are protecting. Juan Orlando Hernandez in particular along with other National Party government officials have launched strongly worded attacks in the press against Berta Oliva, Director for COFADEH, since she gave testimony in early October at the InterAmerican Human Rights Commission. Besides the verbal attacks, the COFADEH staff and security report that since November 5th, suspicious cars (SUVs with black tinted glass and no license plates) are surveilling the COFADEH offices and  following Berta Oliva and other staff members.  In the context of the elections the increasingly aggressive propaganda and intimidation also creates an atmosphere of fear that can intimidate  the vote especially for supporters of LIBRE. It also directly affects the work of defenders such as COFADEH who are organizing teams of human rights observers to accompany the population on the day of the election in areas in which there are the most HR violations, and threats.
This article was originally publish by HSN member, La Voz de los de Abajo, on the Honduras Resists blog.