Demand the immediate release of EDWIN ESPINAL, and of all political prisoners in Honduras

Long-time Honduran activist Edwin Espinal has been jailed on charges related to protests against election fraud in Honduras. Due to his activism, he has been subject to State harassment, violence, and threats since the 2009 coup d’état. Immediate action is required to push for Edwin’s release and to ensure his safety.

​
Long-time Honduran activist Edwin Robelo Espinal was arrested by police on January 19, on the eve of a week-long nationwide strike. Edwin faces a laundry list of trumped up charges: arson; property damage; and use of homemade explosive material. Edwin is also under State investigation for terrorism and criminal association related to damages to the Marriott Hotel, a multi-billion dollar US chain, during a January 12 protest in Tegucigalpa.

Thousands of Hondurans from all walks of life attended the January 12 action to protest the election fraud that robbed Opposition Alliance presidential candidate Salvador Nasralla of his victory in the November 26, 2017 general elections; the killings of more than 30 anti-fraud protesters and bystanders by state security forces; and the arrests of dozens of political prisoners during the ongoing post-electoral crisis. Edwin’s arbitrary arrest occurred in the context of the election fraud endorsed by the US and Canada, and designed to keep current President Juan Orlando Hernandez in power

Edwin is currently in pretrial detention. At the end of his initial hearing inside military facilities on January 22, the judge ordered pre-trial detention and sent Edwin to La Tolva, a high-security, U.S.-style prison. The prison has extremely restricted visitor access, is run by a military Coronel, and prisoners are only allowed one-hour of sunlight every two weeks amongst other horrific conditions. Although the case has been appealed by local Honduran human rights organization COFADEH, Edwin could remain in detention for two or more years waiting trial.

Edwin Espinal has been a target of state harassment for years

Edwin is an easy-going, kind man who draws young people of all ages to him. Edwin fiercely believes in organizing, supporting all forms of resistance, and solidarity with Honduran social movements and groups. He has never lost hope for change in Honduras.

Edwin’s strong and relentless conviction is what the Honduran government fears. Because of this, since the US- and Canadian-backed military coup in 2009, Edwin has been a constant target of State repression and harassment.

In 2009, Edwin’s partner, Wendy Elizabeth Avila, was killed after excessive exposure to tear gas when State forces violently evicted thousands of protesters gathered at the Brazilian Embassy to welcome ousted President Manuel Zelaya back into the country.

In 2010, Edwin was abducted and tortured by Honduran police, who were later acquitted – in the corrupted legal system – on all charges for their abuses.

One month before the fraudulent, violent 2013 elections, Honduran Military Police and canine units brought in by the Public Prosecutor’s Office illegally raided Edwin’s family’s home, claiming that he possessed drugs, money, and weapons. At the time, Edwin was involved in a community movement to stop the privatization of public soccer fields in his neighborhood used by impoverished youth with limited recreational spaces and resources.

In 2015, Edwin’s mom died in the social security hospital as a result of the $350 million dollar looting of the Honduran Social Security Institute (IHSS) orchestrated by the National Party, in power since 2010.

Edwin has been detained more than a dozen times since 2009 and has been beaten by security forces. The most recent beating was in December 2017 when he participated in a protest against election fraud in Tegucigalpa.

As a result of this constant persecution, the Inter-American Commission on Human Rights (IACHR) granted Edwin protective measures in 2010. The measures were renewed in 2013, shortly after the illegal raid on his family’s home.

Edwin has been interviewed by Democracy Now!, Al Jazeera’s Fault Lines and in the documentary Resistencia: The Fight for the Aguan Valley. His story has also been featured in articles published by Truthout and POLITICO Magazine.

Edwin’s current detention on trumped up charges is one more example of systematic political persecution and targeting of anti-fraud protesters and political opponents of the government. The illegitimate and corrupt government of Juan Orlando Hernandez is targeting its own citizens – people like Edwin – while doing nothing to investigate the hundreds of killings and arbitrary arrests by State forces of social movement activists, protesters, journalists, lawyers, etc.

The legal proceedings against Edwin have completely violated Honduran law and due process. The case is being heard in “national jurisdiction” courts that, according to the charges against Edwin, have no jurisdiction over the case. The judge presiding over the case is the same judge that ordered the raid on Edwin’s house in 2013, which, according to Honduran law, is illegal. Edwin’s legal representatives were given one day (a Sunday) to prepare his defense and he was later sent to prison to await trial, which could take years.

Immediate action is needed for Edwin’s safety and release

We demand Edwin’s immediate release, as well as that of the more than 40 political prisoners throughout the country, and that all the trumped up charges be dropped.

To ensure Edwin’s immediate safety and access to justice, we demand that Honduran authorities immediately release Edwin. But in the meantime, we demand:

§  That Edwin be transferred to a detention center as determined by COFADEH (the Committee of Relatives of the Detained-Disappeared in Honduras), which has provided long-term legal and human rights support for him since 2009. Edwin is currently being held in a jail run by a military officer, and the facility has extremely restricted access for visits by family, friends, and human rights groups. These visits are crucial to help guarantee his safety and well-being while detained. To date, his family and his lawyers have not been able to visit him.

§  That Edwin’s case be transferred out of the “national jurisdiction” courts and into the regular court system.

§  We urge human rights delegations, journalists, and investigators to visit Edwin and other arbitrarily detained political prisoners experiencing repression in the context of the post-electoral crisis and the imposition of the Juan Orlando Hernandez regime.

§  Financial support for Edwin’s family is needed as they seek justice and work to ensure his safety and demand his release.

For more information about Edwin’s case and the human rights situation in the country, CONTACT:

PLEASE CONTACT THE FOLLOWING AUTHORITIES: (Please send freeedwinespinal@gmail.com a copy or report back of your communication)

§  Immediately drop the trumped up charges against Edwin and other political prisoners. Grant the appeal for Edwin’s case which would overturn the January 22 court decision which sent Edwin to prison to await trial.

§  Transfer Edwin to a detention center as determined by COFADEH.

§  Transfer Edwin’s case out of the “national jurisdiction” courts and into the regular court system.

§  Insist to Honduran authorities that Edwin be transferred to a detention center as determined by COFADEH & that Edwin’s case be taken out of the “national jurisdiction” courts and heard by the regular Honduran court system.

§  Of US Congress members: to sign onto the Berta Caceres Act demanding suspension of US military aid to Honduras.

Your local Member of Parliament: https://www.ourcommons.ca/Parliamentarians/en/members

Embassy of Canada in Costa Rica, Honduras and Nicaragua

The Honduran people have declared a national civic strike, demanding that Juan Orlando Hernandez give up his fraudulent claim to have won the elections in November and to stop his inauguration on January 27.

More than 35 people have been killed by military and police since the November 26th election. Hundreds have been injured and hundreds arrested.

Go to our FaceBook Page for frequent updates on the situation and actions.
https://www.facebook.com/HondurasSolidarityNetwork/ 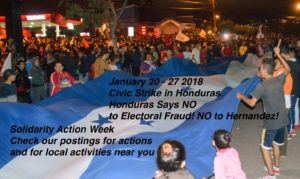