Webinar: Honduras, What is the story?

There is still time to register for the Honduras Solidarity Network’s educational webinar and conversation on Sunday, January 17, 2016. 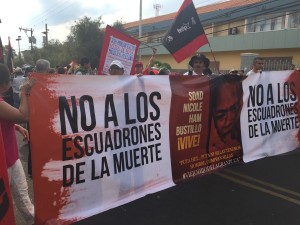 We will hear from presenters with unique expertise in Honduras. They will share their perspective on  its history and current political-economic situation, the resistance and social justice movements, and the role of the United States government in the region.     Register Here Now

Professor Rodolfo Pastor Fasquelle: Professor Pastor has a Doctorate in History and is an expert on Latin American history, politics and colonialism. He was Minister of Culture in President Manual Zelaya’s government and had to flee the country as a political refugee right after the June 28, 2009 coup.  He later returned to Honduras  and now lives in San Pedro Sula.

Gerardo Torres Zelaya: Gerardo became a political activist as a student and was a member of the organization Los Necios at the time of the coup in 2009. Since the coup he has been an active member of the National Front for Popular Resistance (FNRP) and the opposition political party LIBRE. He is a journalist and analyst and currently is the Central American correspondent for TeleSUR English.

Annie Bird: Annie has worked in Guatemala and Honduras investigating and documenting human rights violations and conditions in indigenous and small farming communities. From 1997-2014 she was Co-Director for the organization Rights Action and now is the director of the Rights and Ecology program of the Center for Political Economy. Over the last several years she has published numerous reports on  US policy, militarization and human rights in Honduras.

The webinar is free of charge but you must register to participate:    Register Here Now