On July 24, 2015 a panel of judges in court in La Ceiba, Honduras ruled in favor of a motion by the defense team for Chabelo that since his conviction was annulled he should be released from prison and allowed to defend himself in the re-trial in September as a free man. He was released to his defense lawyer and has to sign-in in person at the police headquarters weekly but for the first time in almost 7 years he is home with his family.

This victory is due to the dedicated defense team and the organized solidarity with Chabelo both inside and outside of Honduras. Now we need to step up support and win his re-trial in September. We still need signatures on the petition. 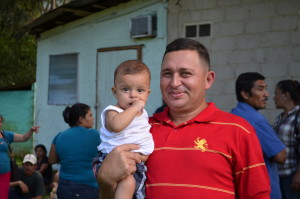 Jose Isabel “Chabelo”Morales Lopez, 38, is a small farmer (campesino), whose family is part of Honduras’ agricultural communities in the Aguán Valley in the heart of the African palm producing region of the northern coast.

He has been in prison for close to 7 years for a crime that he did not commit. His arrest and imprisonment are aimed at punishing and criminalizing the campesino movement in Honduras as well as a productof the well documented corruption and impunity that has Honduras in its grip. This has contributed to its being  one of the poorest countries in the region and one of the most violent in the world. Chabelo is  recognized as unjustly imprisoned by numerous human rights and rural advocacy groups such as, Via Campesina; SOAWatch; FIAN International; the Committee of the Families of the Disappeared Detainees (COFADEH); and the Jesuit institution in Honduras: ERIC‐SJ. 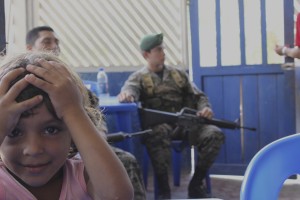 We, the undersigned, oppose the continued militarization by the US government of its foreign and domestic policies on behalf of the military and  prison industrial complexes for the benefit of transnational corporations. June 28 marks the sixth anniversary of the US-supported military coup in Honduras, a country that exemplifies the moral bankruptcy of this policy, and serves as a warning for what is happening in our own communities. We demand:

1. End military and police training and aid to Honduras, Central America, and the militarization of US local police forces.
2. Close the infamous School of the Americas (Western Hemisphere Institute for Security Cooperation).
3. Demilitarize the Drug War at home and abroad and pay reparations to the families of those murdered by a DEA operation in Ahuas, Honduras.
4. Dump the Alliance for Prosperity which will only increase militarization of Central America, and increase human rights violations and pressure on people to migrate.

For more info on US Militarization in Honduras