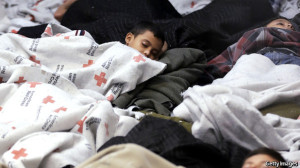 July 14, 2014: The Honduras Solidarity Network, a network of over 30 US solidarity organizations, and Department 19, a network of Hondurans living in the US and Canada, members of the FNRP/LIBRE Party, are appalled and saddened by the refugee crisis on the US border. Children fleeing military and police, drug cartel, corporate violence and extreme poverty in Central America, to reunite with family members in the United States, cannot and must not be viewed through a nativist lens as illegal aliens, but rather as the refugees that they are.

We are ashamed that the response of our political class and the Obama administration to this crisis is to call for yet more militarization of the border and quicker deportation processes with a complete lack of acknowledgement of the responsibility of the US government for creating this crisis over both the long and short term.

The problem of the child refugees is in part blowback from US policy in the 1980s when our government trained and funded Salvadoran and Guatemalan military and police to prevent popular revolutions, and more recently when the US supported the coup against President Manuel Zelaya in Honduras.  US foreign policy, anchored in the militarized Drug War and pursued by both the Democratic and Republican administrations, has only empowered brutal and corrupt armies and police forces, particularly in Honduras and Guatemala.

US so-called free trade and structural adjustment policies have required the countries of Central America and Mexico to cut social services and credit to small farmers while wiping out local producers with a flood of low-cost, US taxpayer-subsidized products from US agribusiness. These policies have increased poverty and desperation in Central America and Mexico and created a fertile recruiting ground for drug cartels and criminal gangs.

The Obama administration bears particular responsibility for the influx of refugees from Honduras. The US turned a blind eye to the military coup of June 28, 2009 which overthrew the democratically elected government. After a brief suspension of aid, the Obama administration devoted its full diplomatic weight to return Honduras, under its coup-spawned government, to the OAS and UN despite opposition from most countries in Latin America. US Ambassador Lisa Kubiske was quick to recognize current defacto President Juan Orlando Hernandez’ election last November while credible complaints of massive fraud were still coming in. The Obama Administration has spent millions of dollars since the coup to equip and train Honduras’ murderous and corrupt military and police with the result that massacres of small farmers and political assassinations of reporters, Libre Party activists, human rights defenders, indigenous, labor, women, campesinos and LGBTI activists have skyrocketed.

We are especially saddened and incensed that President Obama’s $3.7 billion request to Congress for emergency funds to deal with the refugee crisis contains almost $2 billion for more incarceration and removal of minors and refugees, without regard to their due process rights or the root causes of their desperate flight from their home countries. Indeed, in order to speed their deportation, he has called for suspending a 2008 law which requires minors to be transferred out of detention to centers where they can locate family members to care for them.

We call on the Obama administration and all elected officials to stop playing politics with the lives of children, and we demand:

That the Obama administration abide by international treaties and US laws concerning the treatment and due process rights of refugees claiming asylum and of minor children; and

Stop all deportations until a comprehensive immigration reform bill, based on human rights and family reunification, not militarization of the border, is passed by Congress, and

Thoroughly revise our trade and economic, drug and military policies so that they respect the right of self-determination of the peoples of Central America and Mexico to create alternatives to displacement and migration with living wage jobs, prosperous communities and accountable and democratic governments.