Xiomara: We will defeat them in the streets! 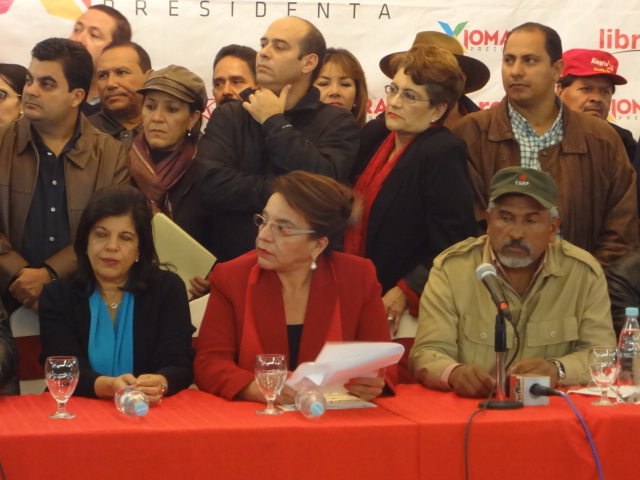 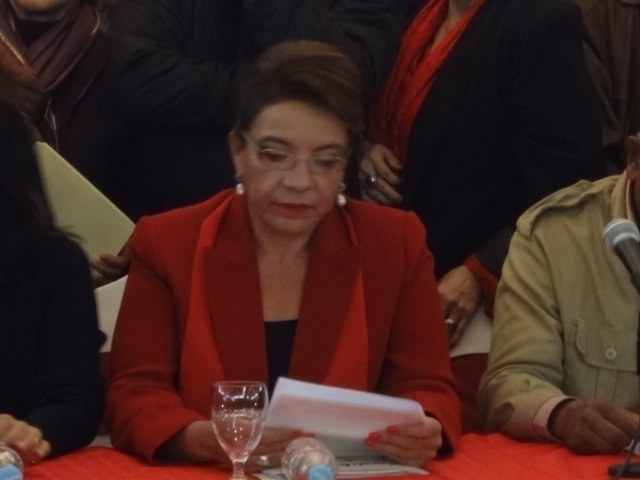 Members of the national and international press, Sisters and brothers of struggle,
People of Honduras, Beloved comrades,
Five days after the end of the electoral process in our country, after several public appearances, I am here once again before you, to reiterate that we have found innumerable proof of the disgusting monstrosity with which they are stealing the presidency of the republic from our people of Honduras.
Our position is unwavering and unceasing: while they don’t allow us access to the system of the Supreme Electoral Tribunal, we will not accept the results emitted by that Electoral Tribunal.
We do not recognize the legitimacy of any government that is the product of this shameful assault. We will demonstrate that triumph of LIBRE was the will of the Honduran people with its votes on November 24th. And this triumph is being stolen by those who have turned the electoral system into a farce, by falsifying voting records and adulterating electoral results.
We demand, together with our people, that they allow us to look over the 16,135 original records where the will of the people was expressed. And for those that show inconsistencies in the recording, we demand public scrutiny of every one of those polling places.
I denounce that this government, that this group that is governing the country, has no respect for the institutions of Honduras. They know that they have stolen the will of the people and right now they ignore our position and are trying to use force to install a regime that came from fraud, to continue sustaining the brutal violence, the intimidation, the violation of human rights and the continual and unyielding action of the system that impoverishes our people in order to subdue and manipulate them.
They have everything. The power to bully us, attack us and to persecute our people. But they will never make us give up our dignity!
Sisters and brothers, let us peacefully take to the streets that we came from!
Chants: To the streets! To the streets! To the streets!
We are going to defend our triumph in every one of the communities where we know the people are awaiting us. To see that they respect every vote. Every will that was expressed at the polls.
I swear, I swear for my kids, that I will not rest until I see a Honduras that is free, sovereign, independent.
Chanting: Xiomara! Xiomara! Xiomara!
We are going to make a reality of the dream of Morazán. Resistance and re-foundation. Here, in the presence of all of you, I ask the party, to launch all of the necessary actions to defend the will of each and every Honduran. In defense also of our candidates for mayor and congress.
All of this, within the parameters of morality, of respect, of the rights of others, and of the policy of non-violence that rules in our party, to continue this struggle, that should not end until this international nightmare that oppresses us, sustained by evil sons of this land who do not deserve to live here, has come to its end.
To our people, to the youth, to the teachers, to the workers, to the businesspeople, home-makers, women and men, I call on all of us to defend our proposal to create a homeland, a democratic state instead of this oligarchic state that oppresses us and that today seeks to subjugate us through this monstrous fraud.
I ask you, let us stand up and place ourselves immediately at the disposition of the orders that will come from our leaders and our general coordinators. To those who are against freedom and against the people’s sovereignty, I tell you that this struggle has just begun! They will never be able to defeat our people, we are stronger than ever because we are organized in more than 20,000 collectives nationally. With the consciousness and the conviction to work through this great network of information and communication to guarantee that not one of these actions of fraud are not reported.
Chants: Long live Xiomara! The people, united, will never be defeated!
For the memory of those who gave their lives for a better world that is still possible, I swear before you, that we will not cede even for an instant until we carry out our historic mission of defending our people, with our morals, in every battlefield necessary. We will never stop struggling! We will never forget the atrocious crimes of those who kill our people with hunger every day so that they never, and be completely clear, they will never be able to kill our hopes.
We will defeat them in the streets, we already beat them at the polls. Until the final victory! Thank you very much.
Xiomara: We will defeat them in the streets!
http://hondurasresists.blogspot.com/2013/11/xiomara-we-will-defeat-them-in-streets.html
LIBRE details election fraud
http://hondurasresists.blogspot.com/2013/11/libre-details-electoral-fraud-english.html