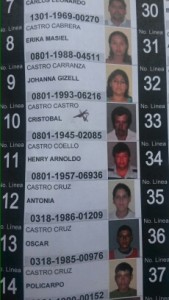 MARK WEISBROT, DAN BEETON, beeton at cepr.net, @Dan_Beeton
Weisbrot is co-director of the Center for Economic and Policy Research, Beeton is international communications director for the group, which stated today:

“The official results as being reported by Honduras’ electoral authorities (the TSE) are being disputed by two of the political parties and presidential candidates: Xiomara Castro of the LIBRE party (who the TSE says finished second, based on 54 percent of electoral tallies counted) and Salvador Nasralla of the Anti-Corruption Party (PAC) (who the TSE says finished fourth). Nasralla told various TV and radio outlets last night that the results reported by the TSE did not match those that were transmitted to the parties. As part of the counting process, tally results from the voting centers are shared with the parties.

“During the voting, observers witnessed various incidents of apparent party allegiance buying, where voting center representatives of small parties may have sold their representation to the National Party, as well as National Party intimidation and threats against observers and other party representatives. There are also allegations, with purported photo evidence, of vote-buying by the National Party in various voting centers. These are among other irregularities reported by human rights organizations, lawyers’ delegations, and others, and documented here, here, and here. Further, the murder of two LIBRE leaders on the eve of the elections as well as the murder of five people in Mosquitia, which led to the suspension of the electoral process in the local community, were notable and serious violent incidents that impacted the election.

“Regardless of the final outcome, Honduras’ century-long two-party dominance of the political system has been broken. The LIBRE especially has emerged as a major political force, institutionalizing in a political way the massive social movement that erupted in opposition to the 2009 coup and offering greater representation to the interests of Honduras’ historically disenfranchised sectors.”