HSN members are organizing and participating in actions for the anniversary of the coup on June 28th in Boston, Chicago, New York, Washington DC, Milwaukee, St. Louis and the San Francisco Bay Area. More info below. 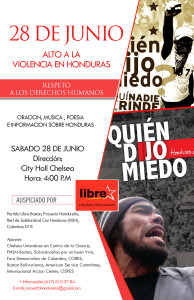 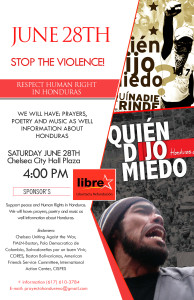 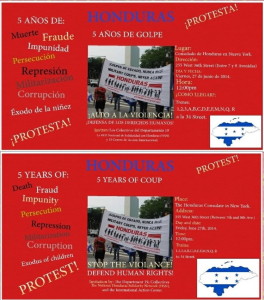 Saint Louis, Missouri: The Honduras Task Force of the Inter-Faith Committee on Latin America in St. Louis will be marching in the the Pride Parade in St. Louis on Sunday, June 29th, carrying posters of our martyred compañeros y compañeras en Honduras and signs about the coup. At the IFCLA’s annual dinner  that evening, there will be a presentation about the situation in Honduras and Honduras will be represented at a local weekly peace vigil on a busy street corner in the city and speak about the anniversary and current situation.

Five years ago, on June 28, 2009, graduates of the School of the Americas overthrew the democratically-elected government of Honduras.

In a well-planned operation, 200 masked soldiers under the command of SOA graduate General Romeo Vásquez Velásquez stormed the presidential palace in the middle of the night. The soldiers grabbed President Zelaya from his bed, forced him onto an airplane and flew him into exile. The state television was taken off the air. Electricity to the capital, Tegucigalpa, was cut, as were telephone lines and cell phone service.The leadership of SOA graduates in the coup follows a pattern of anti-democratic actions by graduates of the school (renamed Western Hemisphere Institute for Security Cooperation, WHINSEC), a U.S. military training facility for Latin American soldiers.

The past five years have been marred by violent repression against the Honduran social movements, continued U.S. aid and training for the abusive Honduran security forces, fraudulent elections that kept the coup supporters in power, and the torture and murder of members of the opposition. Despite the violence, campesinos, indigenous groups, environmentalists, LGBTI communities, feminists, students, and human rights activists are mobilizing for justice, dignity and self-determination.

On June 28, 2014, the 5th anniversary of the SOA graduate-led military coup in Honduras, SOA Watch will join the Torture Abolition and Survivors Support Coalition (TASSC) International for a vigil in Lafayette Park at the White House in Washington, DC from 9:00am – 5:00pm

We will stand in solidarity with the Resistance in Honduras, commemorate all the victims of torture by keeping vigil, celebrate life, remember lost friends and family, and renew our commitment to a world where peace rules and torture is forever banned.